So where do i start? My husband and I have been asking that question since we returned from a wonderful 3 week vacation in the U.S. We literally have thousands and thousands of photos from this very eventful and exciting trip! We went to so many places and did so many things! And really again… where do I start? Let’s start from the beginning as all stories do.

If you have read my past posts then you’d know that my mom survived cervical cancer. It was a very difficult season in our lives. After months of chemo and radiation treatments.. My mom, who dropped weight and got very weak, was able to, by the grace of God, completely beat the cancer. It truly was a combination of her strength and fighiting spirit, as well as a miracle from the Lord above. As a gift to her for beating the disease, GP and I promised we would take her to the States. (as she had never been and it had always been a dream of hers) So our planned  honeymoon became a mommymoon :) But GP and I really didn’t mind.  My husband told me, “This is a celebration of life, and triumph of your moms courage, she deserves a reward for what she has overcome.” (isn’t he the sweetest?)  GP then proceeded to plan a very comprehensive, fun filled itinerary for my mom to really experience the US. A vacation that spanned both coasts, from Los Angeles, to San Francisco, to New York, to Washington DC and then back to LA.

We left Manila July 13th and took PAL’s new flights. Our travel agent got our tickets for $800 roundtrip to LA at a travel expo!  Very cheap indeed but when we got to the plane…. TADA… Budget na budget! No TV’s and no USB plug in. 13 hours! I guess you really do get what you pay for. I’m one that can sleep anywhere, and my mother has the same skill. My husband on the other hand has difficulty sleeping on planes, haha… So of course he kept complaining and wanting to call our agent. Fortunately i had my iPad filled with shows and movies, so he did a intercontinental House of Cards and Orange is the New Black marathon as mom and I snored away.

We arrived in Los Angeles at 8 in the morning, which is a good time (so the new pal flights do have their advantages) GP’s younger sister Margaux who went to college in LA, and got married and lives in Valencia with her husband Raff and their with their adorable 3 year old AJ picked us up and took as around immediately. We didn’t waste any time showing mom the sights! Within the first two days we visited Americana, Mann’s Chinese Theater (which has been bought by Chinese TV brand TCL and is now called TCL Chinese theater!) we shopped in Rodeo Drive, Old Town Pasadena, ate in In ‘n’ Out!!!

But one of the best experiences we had in our first few days in LA was our private VIP tour of  the Warner Brothers Studios. This was no ordinary tour i tell you! GP’s friend and kumpare Rey Rolle, a Filipino, holds a high position in Warner! In fact he wanted us to watch the Ellen show live!! But it was off season. Rey is an executive and a big shot in WB and proudly pinoy! He took us around in a special VIP tour and even let me drive Ellen’s golf cart! I was freaking out. I wanted to kiss the steering wheel! Hahaha!

We toured the entire studio and could get down anywhere we wanted, to touch the backlot buildings, see the star’s offices. We saw so much that now i’d have to divide my posts unless you want to scroll down to a thousand pictures. My favorite part was the Central Perk set from FRIENDS! OMG GP and I are such fans! But first Let’s start with the Batman exhibit. To celebrate Batman’s 75th anniversary, Warner set up a fantastic Batman showcase, transporting us into the world of the caped crusade, with Grappling Guns,  Batarangs, and Batsuits. We got up close to the iconic costumes, gadgetry and vehicles used in all seven movies.

The six iconic Batsuits were on display including the original version worn by Michael Keaton in Batman and the final Christian Bale costume from The Dark Knight Rises. Even Heath Ledger’s actual joker outfit! You’ll see a wide range of authentic costumes including those worn by Poison Ivy, The Riddler, Mr Freeze and Catwoman worn by Halley Berry! We also got to tour the Car Vault which features a selections of super cool vehicles with the Bathammer, Bat-Pod and Tumbler taking centre stage. The Bat-Signal, used to call Bruce Wayne’s alter ego at a time of need! Oh so so much….to see. What a truly privileged experience! Thank you Rey! 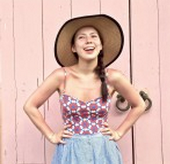